Mesoamerica is a classification that is not defined by geography or languages, rather by the presence of cultural traits. These traits included forms of game with a rubber ball in a rectangular court, codices; books made of sheets of bark paper or deerskin and a common diet of maize, beans and squash.

The ancient Maya lived in a region that today includes Guatemala, Belize, the Yucatán peninsula (Mexico) and the western portions of Honduras and El Salvador.  The homeland is bounded by the Caribbean Sea, the Gulf of Mexico and the Pacific Ocean. The area was geographically diverse and included the rich southern Pacific coastal plains, the high fertile basins of the volcanic highlands of southern Guatemala and central Chiapas and the lowland rainforest region of northern Guatemala, Belize and Yucatán. The lowland area is where we see the beginnings of Maya civilisation.

The central area of the lowlands was a closed basin, with swamps and shallow lakes.  The water supply was seasonal, which necessitated the construction of bajos in order to have water throughout the year.  Yucatán had thinner soils and more limited surface water and so required different adaptations, with a greater emphasis on coastal trade and various types of water catchment systems, such as chultuns – large subterranean chambers with constricted orifices and cenotes – natural limestone sinks dropping to an exposed water table.

Maya cities generally contained a ceremonial centre where great pyramids, temples, palaces and ballcourts were built. Many centres had causeways (roadways) and also stelae; standing stones that contained both portraits of rulers and writings about them. 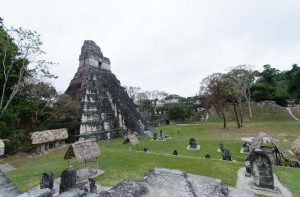 The Maya pyramids were stepped and had a central staircase and a small structure on top. The Maya rulers often built their pyramids on top of one another, so if a ruler wanted to celebrate an important event or if a new ruler came to power a building would be constructed over the old one. You can imagine how exciting this is for archaeologists, as we are literally digging through time!

Show pupils a map of the Maya area, using the above or the online source below and discuss the areas in which they live.

Electronic Atlas of the Ancient Maya created by Maya archaeologists