Did the Maya Play football? 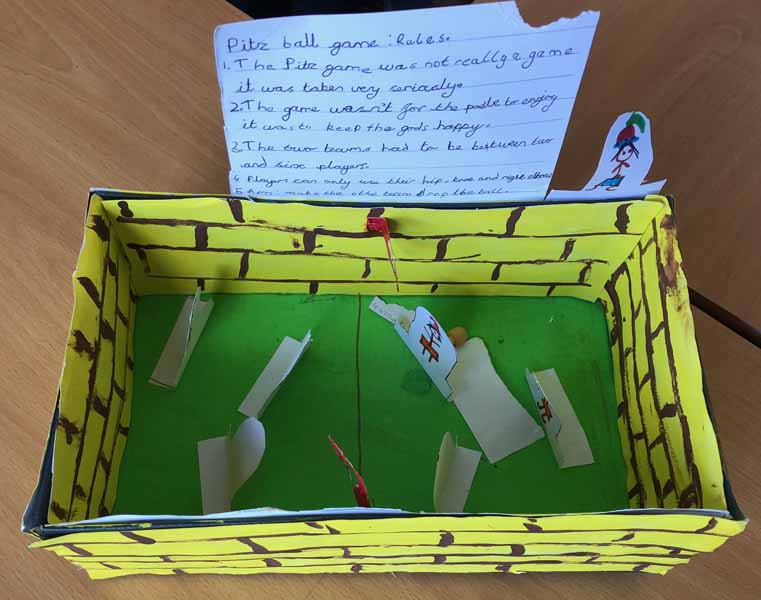 The Maya ballgame (pok-ta-pok or pitz) was only one type of several played throughout Mesoamerica. Ballcourts were often located within ceremonial centres and usually each important site had a ballcourt.

How to play the Maya ballgame

The court was divided into two halves by a line perpendicular to its long axis, and opposing teams faced each other across this dividing line. The Maya wore heavy body padding and belts.

The ball; a rubber sphere which is depicted in various sizes, could be hit with the elbows, hips and knees, but never the hands or feet.

A point was scored for one team when the opposing team failed to return the ball before it bounced a second time, or when the ball reached the opposing end zone (or when thrown through one of the two stone rings, a later addition).

It is thought that the rubber ball was produced by mixing latex with juice from the morning glory vine, which contains a chemical that makes the rubber less brittle and more bouncy.

So they were quite advanced chemists as well!

What is the Popul Vuh?

The Popul Vuh is the story of Maya creation and includes the great myth of the Hero Twins, Hunahpu and Xbalanque. These twins became great ballplayers and were summoned to a ballgame by the Underworld Lords.

In their first game, the Lords tried to use a skull as a ball, to which the Hero Twins refused. However, they had to undertake several trials in various Underworld houses, in which one, the “House of Bats”, Hunahpu had his head chopped off! The lords hung his head over the ballcourt and announced that it would be used as the ball at the next match. Yet Xbalanque fashioned a temporary head for his brother’s body and persuaded a rabbit to impersonate the ball, so he could retrieve Hunahpu’s head and restore him whole!

2
Are there still Maya People living Today? How did the Maya Add and Subtract?

4 Responses to "Did the Maya Play Football?"